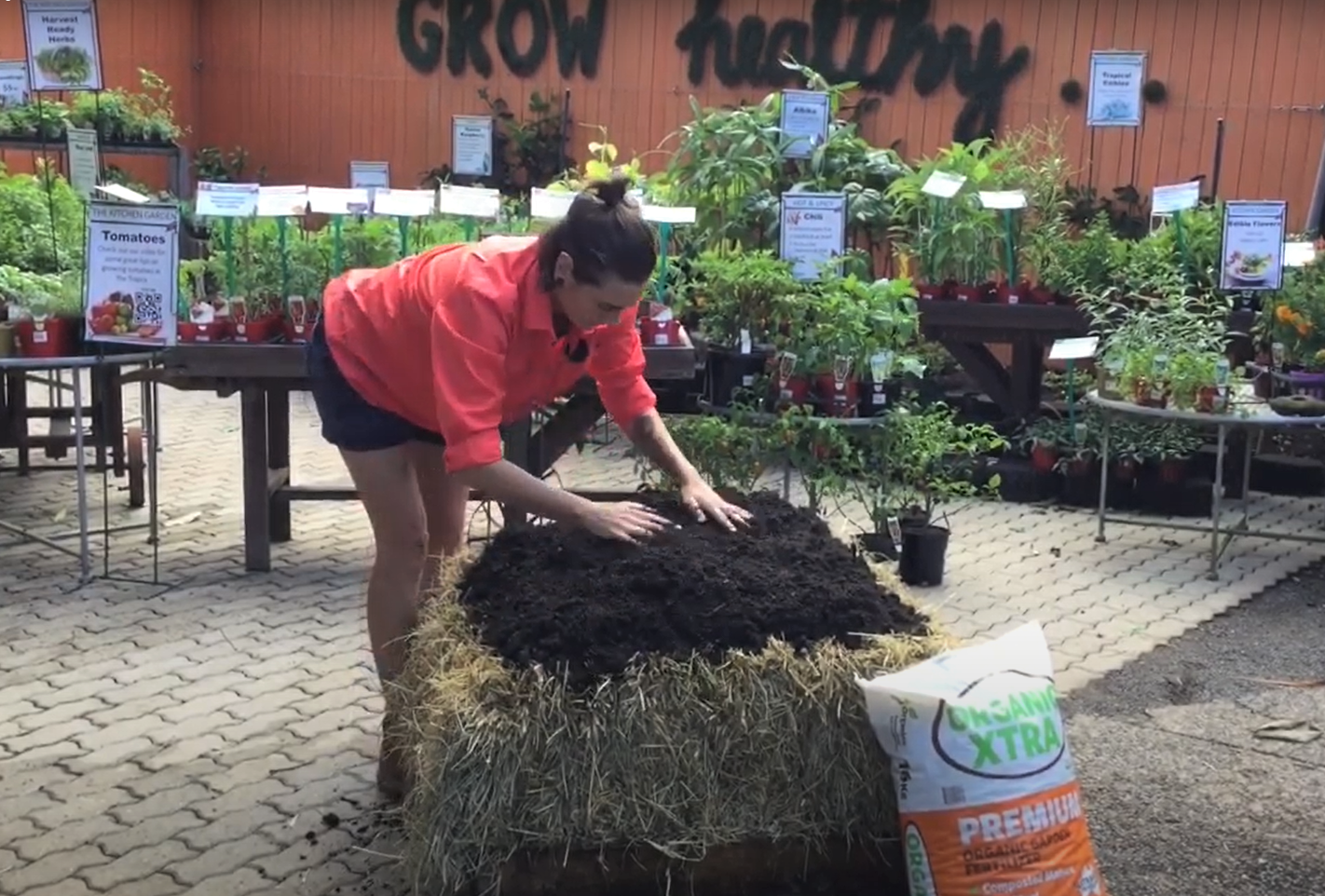 Hay Bale gardens are a great way to grow annual herbs and veg if you don’t have a permanent garden space.

Elle shows us the process of making one of these handy garden beds. A great project to do with the Kids!

Hay is a great mulch for your garden because it’s a good source of organic matter, it holds in moisture and it breaks down and makes nutrients available for your plants.

Another great use for it is making hay bale gardens.

The beauty of a hay bale garden is that you can put them pretty much anywhere! They are inexpensive to make as you need very few resources, and you can grow pretty much any kind of veggies in them. By the end of the growing period you have this amazing composted product that you can then use in your garden.

You’ll need a nice sunny spot because most of your herbs and veg like a full sun, a base – we’ve upcycled this old pallet for our base but you can use cardboard or weed matting, anything to stop the weeds coming through. Hay bales – we’ve used 2, but you can use as few or as many as you like. Then we’re going to use two bags of Active Grow for the growing medium and Organic Xtra fertiliser pellets.

You want to put your hay bales on the base, and leave the strings on to make sure that  your hay bale garden holds its shape.

Start out by sprinkling a generous amount of Organic Xtra – we use Organic Xtra because it’s our favourite, but you can use any high nitrogen fertiliser. Adding fertiliser is important to start the decomposition process – it breaks down the hay bales and makes the nutrients available to the plants.

Water it in really well to spread all of the fertiliser into your hay bales.

2 weeks later – we’ve moved the garden to it’s final spot. As you can see we’ve covered it with a layer of mulch we’ve pulled from the side of the hay bale. That holds in the moisture and stops the Active Grow from falling off when you water it.

We’re not planting anything yet as I’ll show you what’s happening inside the hay bale garden. Because the hay is in the process of decomposing there’s a lot of heat being produced. It’s fairly hot to hold my hand in here at the moment so you don’t want to be planting into this because it will burn the root system of your plants.

It’s a few weeks later and it’s cooled down so that I can comfortably put my hand in there so it’s ready to plant in. I’ve picked a selection of plants that grow really well together – I always plant some flowers in my gardens to attract pollinators and beneficial insects.

We’re planting Marigolds, a rainbow chilli, some mint and strawberries that will cascade down the sides and some spring onions to fill the gaps. In the middle we’ll be planting our rainbow chilli which will grow up bigger than the marigolds and fill out. We’re planting the mint and strawberries at the front so they can Cascade down and we can pick the fruit, and we’re just going to be using some little spring onions and a perennial coriander to fill in the gaps.

Because it’s had time to decompose it’s going to be really easy to dig into. Just remember when you’re planting that not all plants like to have their roots disturbed. To get your plants out of the pot, place your hand over the soil and tip it up, just give it a light tap to loosen the pot off, and plant it straight in.

And now I’m just going to intersperse these spring onions to fill up some of these little gaps we’ve got.

So we planted it all out and as you may have noticed I’ve left the light layer of mulch that I’ve just moved around between the plants. We’re going to water this one pretty thoroughly when we need to – we have just had a lot of rain over the last week so this is still pretty wet. A general rule for them – if it looks wet, leave it, if you can see it’s starting to dry out, make sure you give it a thorough water so that it gets through to all of the plant root systems.